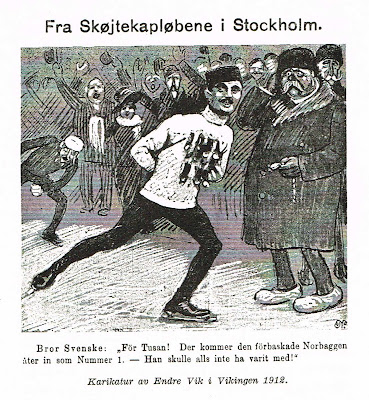 Lap by lap he rode, Oscar Mathisen, striding over the Östermalm ice, rolling from side to side, cutting into the surface hardened after days of deep frost and smoothened by the mild air of a hundred years ago today. He felt in control. His muscles obeyed unblinkingly even after his long train journey from Klagenfurt, and the meters flew past him like swift birds in his training laps. Enger, his physio, and his team leader, the wholesale merchant Botolfsen from the club board, were still with him, but now they had a whole team to lead and massage, as Martin Sæterhaug, Henning Olsen and Stener Johannessen had been sent from home. Martin had been here since Wednesday. Olsen and Johannesen came the day before, just like himself, but from a different direction. The Finns had sent the veteran Strömstén and the debutant Walter Tverin. The Russian representative arrived on Thursday, but again there was no Strunnikov. Instead they had sent yet another unknown teenager, Vasilij Ippolitov. All the best Swedes were present, of course, and the Dane Sørensen had accompanied Oscar from Klagenfurt, but he had developed an unpleasant cough and was doubtful for the championship, unfortunately.

The Swedish sport journalists wrote column after column in the days before the championship. Even when the hope of a Mathisen-Strunnikov duel disappeared, they at least expected their own boys to give the Nordbagge a run for his money. The Olympic Games were at hand, and the atmosphere in the Swedish sporting scene was electrified. The biggest home attraction was not the speedskating though, at least evidently the journalists thought so. The figures were the main thing for them. The big hero Ulrich Salchow, who had taken his 10th World Championship the year before, was indisposed and unable to start. But they had a promising heir in Gösta Sandahl, to defend the blue and yellow colours at this championship. But as the days went by, it became clear that the figure skating championship wasn’t going to be much of a championship. The only title rivals that eventually turned up were the Norwegian Martin Stixrud and the Russian Ivan Malinin. The German champion Werner Rittberger was entered, but did not appear, and the two other favourites, the Austrian Fritz Kächler and the Hungarian Andor Szende weren’t even entered.

The deep cold that had prevailed in the north until very recently may have been a vital factor in their decision to stay away, but it is my guess that the fashion in which Salchow won his last championship may have played a role, too. It took place in Berlin, the home ice of Rittberger, and anyone with some knowledge of the sport could see that he and Salchow did not have much between them as the championship proceeded. Salchow did the figures best while the home favourite seemed ahead in the freestyle event. In order to secure his well-deserved tenth the Swedish judge, Isaac Westergrén, therefore thought it was a good idea to put the German in 5th place at both events, just to be on the safe side. Fortunately(?) for Salchow that proved sufficient. Rittberger made resentful, energetic and persistent protests, but to no avail. Judgements are judgements.

The Östermalm infield was covered in deep snow and the mild weather made it impossible to prepare a track for the figure skating, so it was moved to Värtans Is on Djursholm island. Good riddance it seems most people thought, because only a few dozens of spectators were present there despite the fact that the figures started early in the morning to make sure everyone could attend both events. Apparently the general public preferred to watch the Nordbagge trying to win back his second championship for the season against a whole bunch of young, upcoming home skaters instead of witnessing the figure skating farce at Djursholmen.

When the first pair was ready at 2pm the weather was far from ideal with a thick, stinking city fog and 4 degrees above zero. But still the ice retained some of the deep cold from the days before, and the high air temperature kept it from absorbing the fog. Albert Berglund was required to skate alone in this first pair because the Dane was unable to start. He completed his 500 in 49,6, one second behind his pb. But the next pair was speedier, containing the championship favourite himself, Oscar Mathisen, against his supposed best Norwegian rival, Henning Olsen, not the best home skater as the usual practice was. They must have reckoned that he would be better off without such a treatment as could be expected here.

“För öfrigt är man ej förvånad öfver at Oscar Mathiesen är så god för närvarande. Man behöfver blott mönstra hans ofantligt utvecklade muskulatur och kasta en blick på hans glada, obekymrade min för att konstatera att han besitter ett öfvermått af hälsa, kraft og energi.” (And there is no reason to be surprised that Oscar Mathiesen is so good at the moment. One need only to witness his immensely developed musculature and his happy, unconcerned face to conclude that he possesses a plethora of health, vigour and energy.) The quote is from the Dagens Nyheter journalist, and the man who gave him these impressions, and who had set out to prove that he was the best European skater in the absence of his main rival, was aware that he would need all his health, vigour and energy to remove any doubt of his superiority over Strunnikov. The flag fell and they were off, Oscar quickly pacing away from his pairmate. In the outer curve he lay all the energy and precision he could muster in his stride and on the back straight he crossed ahead of his strong clubmate from the outer track. He entered the final curve in his usual stunningly daring fashion, making up for any loss of figure skating acrobatics the audience might miss and drawing an astonished applause that increased to a crescendo when the sensational time was read: 44,8—equal to the offiicial world record and yet again a new lowland record. Olsen managed 47,2.

In the 3rd pair, Stener Johannessen also skated alone, as one of the Swedes had withdrawn, and clocked 48,8, only 1/5 behind his pb. In the 4th, Ippolitov and Jean Pettersson were equal until the last straight, where the Russian finished best and achieved a new pb with 48,2, the Swede 6/10 behind. Sæterhaug sprinted well in the 5th pair and beat Strömstén clearly with 46,2 against 47,8, but it paled somewhat compared to 44,8. Then the new Swedish top skater Cederlöf crushed his pb in 47,8 while his pairmate Paul Poss (formerly Pettersson) disappointed somewhat. Another Swedish newcomer, Paul Zerling, ended well behind the top home favourite Andersson, who went into 4th place with 47,4. Finally, Tverin beat another Swedish debutant, Axelsson, both setting pbs in 47,8 and 48,0.


The break before the 5000m was shortened due to the lack of fill material. But the temperature was falling and the fog started freezing on the ice, making it rough and uncooperative. The home favourite Andersson was set up in the first pair with Olsen, and beat him by a 100 meters despite a final flourish by the Norwegian. The time was 9.20,4. Then the home audience got their first big stimulus for the weekend when Axelson, whose pb was over 9.40, hung on to the famous Finn Strömstén and gave him a bitter, stubborn fight for one lap after another. The audience joined in and screamed and shouted at their new favourite, who in his surprise, delight and excitement tinged with a bit of fright pulled out abilities that he hadn’t known that he possessed. At the final bell they still skated side by side, but in the end the sisu and experience of the Finn prevailed and he crossed the line in 9.14,4, 4/10 ahead of Axelson.

Poss and Zerling also skated well in the 3rd pair, with the latter winning in 9.23,0. In the 4th pair, Cederlöf skated powerfully away from Tverin and clocked 9.18,6—a third place so far. Johannessen beat Berglund easily and impressed the Swedes with his supple curve technique. But his time was only 9.25,3.

Finally in the 6th pair the top favourite was ready against Sæterhaug. Thousands of expectant pairs of eyes turned towards him. And they weren’t disappointed. His pace was murderous from the start. He literally flew through the curves if we are to believe the journalists. Laps of 42 and 43 were followed by 44s and a few 45s towards the end. The Trønder did not try to follow, and was more than 150 meters behind when Oscar finished in the best time of the day by far, 9.03,4.

Last pair was Ippolitov and Pettersson. The Russian quickly took the lead, but fell after just a few laps and was overtaken by the Swede. But he brushed it off and got into his stride again, passing Pettersson and beating him by a 100 meters in the end. The time was moderate, 9.30,6, but still 8/10 below his recent pb from Moscow.

The championship continues tomorrow with the 1500 and 10000m.